Many believe it would be tough to find a better pairing than Wisconsin’s autumn scenery and the unobstructed view from a motorcycle. Just ask any of the 30,000 to 40,000 cycle enthusiasts who take part in the annual Tomahawk Fall Ride, now in its 26th year.

Held every September, this rally raises funds for muscular dystrophy and gives riders the chance to tour two nearby Harley-Davidson plants-as well as Wisconsin’s picturesque Northwoods.

Though Milwaukee’s Harley-Davidson Museum won’t open until 2008, enthusiasts can tour the company’s Tomahawk facilities as well as its plant in Wauwatosa, a Milwaukee suburb.

There, visitors are immersed in company heritage with a Harley-Davidson engine timeline-from the classic Flathead to the contemporary Twin Cam 88. On the factory floor, Sportster and Buell powertrains take shape on the assembly line and engines are hot-tested to ensure they meet the company’s standards.

Prime fall-color viewing lasts six to eight weeks in Wisconsin, with colors peaking first along the Lake Superior shoreline and throughout Wisconsin’s Northwoods in mid- to late-September. Here are a few of the state’s more popular touring areas for both motorcycle and auto enthusiasts:

Visitors coming from any direction may want to tour the Bayfield Peninsula/Apostle Islands area. The Apostles are a chain of 22 islands in Lake Superior off Wisconsin’s northern tip. While 21 of the 22 islands are a National Park Service property and not accessible to motorcycles, Madeline Island is reachable by car ferry from the picturesque port town of Bayfield. All of the islands can be seen by tour boat. Both the islands and the Lake Superior coastline feature captivating sandstone cliffs, sea caves, stunning rock formations, and historic lighthouses. 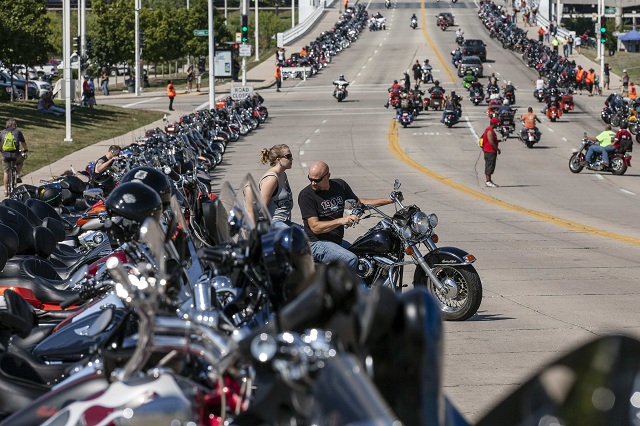 The Great River Road forms the western boundary of Wisconsin’s unglaciated area, a unique topographical region that offers some of the best ridings in the Midwest, according to Peter Egan, editor-at-large for Cycle World and Road & Track magazines.

“The area bordered by Interstates 90/94 on the east and north, the Mississippi River on the west and the Illinois state line on the south are absolutely fantastic for motorcycle touring,” says Egan. “It is very hilly and rural, with winding two-lane roads that cross creeks and bridges, climb ridges, flow down into valleys and roll through lots of quaint small towns with biker-friendly cafes.”

In addition to the Great River Road, Egan recommends riding in the Elroy/Kendall/Ontario area (near Wildcat Mountain State Park); touring down the Kickapoo River Valley through LaFarge, Viola and other small towns along Highway 131; and cruising along the Wisconsin River Valley on Highways 14 and 60 in Sauk and Richland Counties. He is also fond of the rural highways and county roads in Green and Lafayette counties, including the trip from New Glarus to Darlington.